During the years that Jelani Eddington has given concerts, he has easily established himself as one of the most prominent and sought-after artists on the concert circuit. Eddington has performed in most of the major concert venues throughout the United States, has toured extensively abroad, and has received numerous awards and recognitions, including his selection as the 2001 Theatre Organist Of The Year. 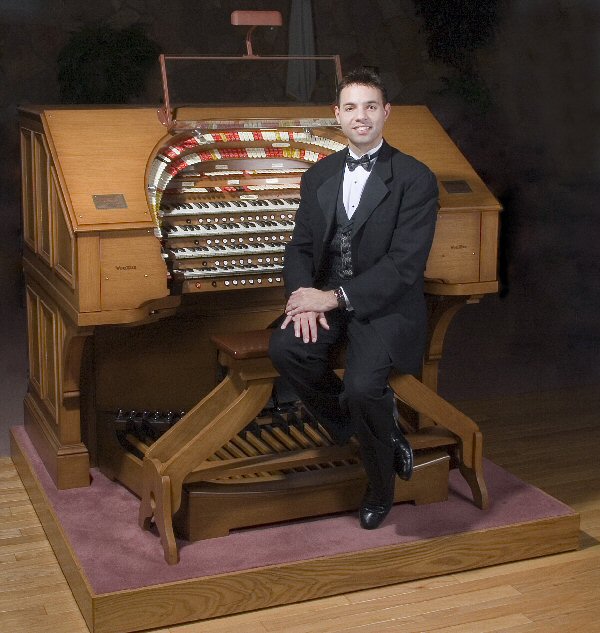 Jelani Eddington was born in Muncie, Ind., to Louise Eddington and the late Robert Eddington and grew up in a very musical family. Between the interests of his mother, a professional music teacher of many years, and those of his grandmother Florence Arnold, a well-respected piano instructor, it was no surprise when Jelani demonstrated an inclination toward music at a very early age.

Shortly after beginning piano instruction at age 4, Jelani began studying classical piano under the direction of his grandmother. At the age of 8, a trip to hear the 4/42 Wurlitzer theatre pipe organ installed in the Indianapolis, Ind. Paramount Music Palace restaurant introduced Jelani to the sounds of the theatre pipe organ. Soon thereafter, he began to pursue classical organ lessons and ultimately began studying theatre organ under the direction of John Ferguson, whose skills as a theatre organ instructor have been highly acclaimed internationally.

During the course of his concert career, Jelani has been featured at numerous national and regional ATOS conventions, and has toured extensively throughout the world, including numerous concert appearances in the U.S., Canada, Australia, New Zealand, and Europe. In addition to his work as an organist, Jelani has also distinguished himself as a concert pianist, appearing recently as a guest pianist for performances of Edvard Grieg’s Piano Concerto in A Minor, George Gershwin’s Rhapsody In Blue and Leroy Anderson’s Piano Concerto in C Major. February 2008 Jelani was invited to perform two special performances of Anderson’s concerto with the Tulsa Signature Symphony as part of a celebration of Leroy Anderson’s centennial.

Jelani has also produced and marketed more than 30 theatre organ albums on some of the best-known and most dynamic instruments in the country. In August 2001, the American Theatre Organ Society honored Jelani’s extensive career as a concert and recording organist by naming him the 2001 Theatre Organist Of The Year. Jelani retains the distinction of being the youngest-ever recipient of this prestigious honor.