From Jared:
The exhaustion is setting in and I REALLY want to sleep, but nevertheless I'll power this blog entry out quickly! Today was amazing!!! Congratulations to Seamus for winning the YTOC, and to Richie and Luke for being finalists! Quite prestigious! I hope to do that next year. Not sure what to play though, I'll definitely have to expand my repertoire.... And learn some songs from the 1920s!!! Once again, congrats to everyone today!

After that, I got lunch at Auntie Anne's pretzels (which are HEAVENLY!) and soon after, got on the bus to Mansfield. I sat with Justin LaVoie, and near Chris, Luke, Seamus, and Richie. We shared a lot of stories and information together. But an hour and a half later, found ourselves at the wonderful Renaissance Theatre!! Jelani played WONDERFULLY. I especially enjoyed the song "If". He also did a Les Mis medley, which was very very orchestral. Overall it was well worth seeing. It was also interesting to watch him play along with Donnie Rankin on the drums!

The ride home seemed shorter than getting there. Mainly because us guys fooled around in the back of the bus, laughed the entire way home! (By the way, the bathrooms in the buses have wonderful acoustics!) I'm so lucky and grateful to have such an opportunity.

I arrived at the hotel, and got dinner with my mother at the Hard Rock Cafe. I would totally recommend if you're here in Cleveland! After that I went to the record shop and picked up a copy of the Illustrated history of Wurlitzer, which will be my birthday present 2 months from now! I stayed in the Allen room and played a little, had a small duet with Richie. And now, I retire in my hotel room. Waiting for tomorrow, and I'm very excited!!

First on the schedule was the Young Theatre Organist Competition back at the Cleveland Masonic Temple.

Shamus, Luke and Richie all did an amazing job in YTOC competition. And mind you the Masonic Auditorium installation is the not the most user friendly organ to play, as the organist does have a harder time hearing the organ with the chambers directly and far above the console. Even harder to hear with patrons in the auditorium, yet they all gave professional level concerts. Throughout the competition, I would move to a different section to experience the sound in so many ways. With the huge acoustics in the auditorium, sound is different in every seat, yet you can hear the organ throughout.

Up next was Jelani Eddington at the beautiful and historic Mansfield Renaissance Theatre. All of us sat with Justin LaVoie on the bus and it really was an enjoyable ride down.
I'm actually quite familiar with the Renaissance, as I'm the resident Stage Manager for NEOS Dance Theatre based in Mansfield. NEOS started off under the Renaissance and continues to collaborate with the theatre and Mansfield Symphony. Even though I have spent many hours in that theatre, I have never heard the theatre organ before! The 3/20 "Joe Kearns" Wurlitzer was magnificent. I've seen the console, and a peak in the chambers before, but hearing it for the first time gave me chills! The theatre itself is beautiful, as are all the theatres in the convention. The Renaissance was originally the "Ohio Theatre" which opened in 1928, designed by Nicola Petti. The style is "Grand Baroque" with seashell motifs. The theatre has been undergoing another plaster/paint restoration since I was there last and it looks great so far, looking forward to see it when complete. Jelani was downright awesome, and I was completely entranced by his performance to say the least. Donnie Rankin also played drums for some of the pieces which really made the show special, everything sounded great. As I said, I'm so glad to see the organ in use.

Back at the hotel, Richie, Jared and I returned to the ballroom to play organ (as always). At one point, Richie, Dr. William Coale and Michael Carter (COS UK) did a organ/organ/piano trio on the classic (and on of my favorites), "Five Foot Two, Eyes of Blue". What fun everyone had! And I got it all on video! I've basically spent most of my evening at the hotel in the ballroom, you wouldn't believe how much I've enjoyed talking to all the different people...from all over the world!

It's now 2am as I shut the lights off in the ballroom, I really should get some rest before tomorrow's busy schedule! 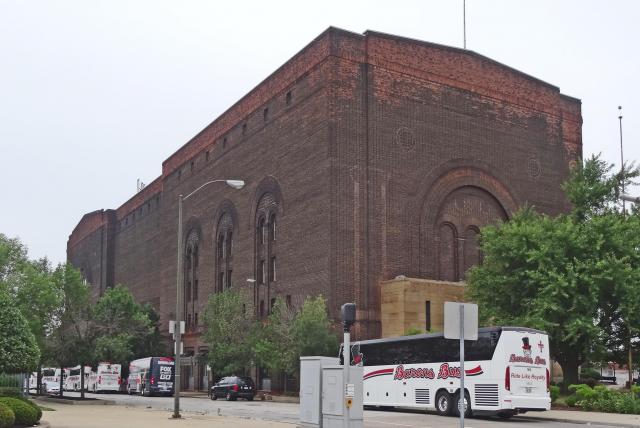