From Christopher:
ATOS Day 4 - Wednesday: What a long day!!

First we started of to see John Lauter at Sandusky State Theatre which is a lovely small town theatre opened in 1928. I have never seen a theatre design like this before and it's a quaint little place. I love the four seasons murals. The organ is a 3/8 Page; this was the first Page organ I have heard. Overall the organ is very mellow, but the reeds are bright and buzzy. Nice experience there.
Afterwards we drove an hour to German's Villa (event center) for lunch. Apparently, they broke a record serving 400 people in 15 minutes; the staff was extremely friendly there.
Next a short drive to the Lorrain Palace Theatre, with Ron Rhode on the 3/10 original Wurlitzer. It really was a beautiful and detailed inside, a design like you have never seen. Actually, when the Lorain Palace was completed, it was the largest one floor motion picture theatre in Ohio,and also the first theatre in Ohio to show a talking motion picture. I have never seen a one floor theatre in this extravagant styling. The organ filled the house well and sounds like it should be there.

When we left the Lorain Palace, we were ahead of schedule and arrived back downtown with plenty of time to find somewhere to eat. After having dinner together, it was time to head over to the Connor Palace at Playhouse Square. Playhouse Square is just an amazing theatre complex with all the venues actually connected together. It is the largest performing arts center in the United States outside of New York. As we entered, I had a chat with one of the Ushers. She reminded me about the restoration of the Ohio's theater's lobby and to see it before the show. So we took a five-second walk through the hallway over to the Ohio Theatre. I have been reading about this project online for awhile now. The theatre re-created the original lobby as it was in 1921 designed by architect Thomas Lamb. The original lobby was completely destroyed in a fire on the weekend of July 4, 1964, within days of the completion of a thorough previous restoration. After taking the painstaking long five-second trip back to the Connor Palace, we took our seats in the balcony. The theatre is pristine, absolutely pristine. Not one scratch, ding or piece of dust anywhere. As David Gray came up on the organ, I immediately knew this would be a special performance. I cannot say enough good things to do this performance justice. This is also the first time I head a Kimball live, and I see why people love Kimball. The organ is voiced perfectly, and the beautiful orchestral sound fits the design of the theatre. It's a beautiful match. Just like Ed Stout said, this performance set a new standard.

Back at the hotel, we had a wonderful chat with David Grey. Afterwards, we played the Allen organs and got to talk to some of my favorite people.

Another great day at the convention.

From Jared:
Quite a bit to write!! I accidentally fell asleep yesterday before I was able to write my blog... No matter, better late than never!! We stared off with breakfast at the hotel, which has a great buffet! The waffles are very good. Next, we boarded the buses for the State Theatre in Sandusky to see John Lauter at the 3/8 Page. The theatre was amazing. I loved the murals of the seasons where the chambers were. John, as always, played excellent. The organ itself was very interesting as well. I do hope to see this theatre again!

After the State, we got lunch at German's Catering. WONDERFUL FOOD!!! If I had the chance I would definitely eat there again!! Especially the loaded shells. They were filling. We took a 30 minute bus ride to the Lorain Palace Theatre after! I liked the things they had for sale.. I bought a Wurlitzer book! Before the show, we watched a preview for the 2017 ATOS Convention, and I might try the YTOC to go to that convention, and play a beautiful theatre organ! The concert was great, and PROPS TO RON RHODE FOR PLAYING A WHOLE CONCERT *AND* A SILENT FILM WITHOUT PISTONS!! I didn't expect it to be that great!!! So Ron, you did great! And the film was hilarious!! Another great feature in this convention.

After the Lorain palace, we returned to the hotel with a lot of spare time! My friends and I wanted to go get dinner, I decided we should go to the Winking Lizard.. Only to find out you had to be 21 and over after 5:00... Oops! We found Juji cafe, and it's great food for a modest price, and only a 5-10 minute walk from the palace!! I think David Gray was probably my most favorite organist, since I'm more orchestral based, as is David, and the LOVELY Kimball Pipe Organ. The John Williams Medley was the best piece this whole convention in my opinion. Fantastic job David!! After that, we got back to the hotel, and played the Allen organ (again) until about 2:00 AM, when we got kicked out! It was a fantastic day!!
Overture Day:
https://www.atos.org/atos-convention-overture-day
Day 2 - July 4:
https://www.atos.org/atos-convention-day-2
Day 3 - July 5:
https://www.atos.org/atos-convention-day-3-july-5 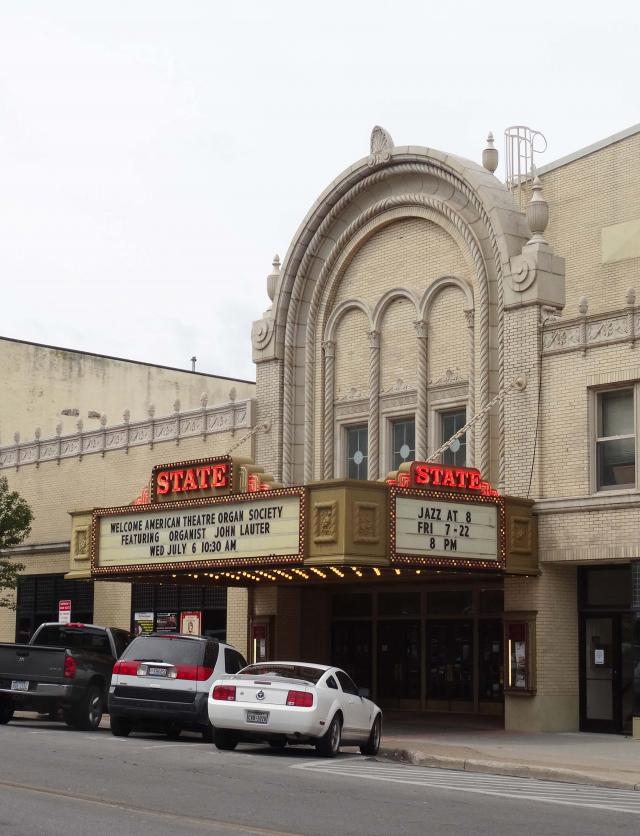