I had the privilege of being in the Chicago area and spending the better part of two days during the recent ATOS Summer Youth Adventure (the “SYA”). It is hard to believe that this event just celebrated its 10th Anniversary!

The twelve attendees this year ranged in age from 11 to 23, with who were enjoying their very first SYA. They had the opportunity to play three five manual theatre organs! That is a first, and it could be the Chicago area is the only location where this could happen.

It was interesting to hear them play the big Barton in Joliet; and hear the excellent musical skill of all the attendees. Even more interesting was the wide-eyed enthusiasm of seeing the five manual behemoth at Sanfilippo’s, and watch the one-on-one teaching going on there. ATOS’ Young Theatre Organist Competition winner Seamus Gethikker was among them, as was convention George Wright Memorial Fellowship winner Christopher J. Ha.

You will hear much more in detail about the event in an upcoming issue of the journal, but I can assure you it was a terrific SYA. I can also tell you without exception that the four I have attended have been eye-opening and very gratifying events. If only we could bring all of you members to one of these – it would reinvigorate your spirit and reconfirm your love of the theatre organ without exception!

The spirit, the energy, the enthusiasm, the skills and interest seem never-ending.
For those who have donated to help make this event happen; those who have provided funding to “scholarship” some of these students so they might attend, we say “Thank You” for your vision! And to all of the parents who were there to assist; to Fred Hermes; our friends at two pizza parlors; Lee Maloney and Allen Organ Co.; Glenn Taller and the management at the Chicago Theatre; Jim Patak, JATOE and our friends at the Rialto Square Theatre; CATOE, the crew at Mundeleinand plus the hard work of CATOE Chairman David Rhodes, and to Jasper and Marian Sanfilippo for the gracious hospitality and high level of interest, our most sincere appreciation for making the 10th year the BEST year for the ATOS Summer Youth Adventure! 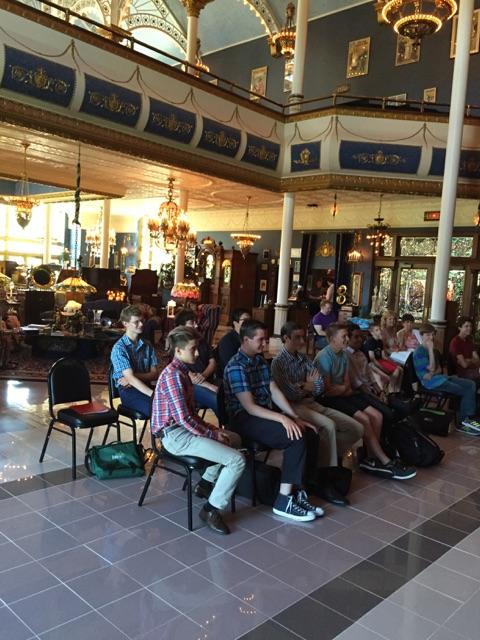