WurliTzer opus 875 was the first of the “mighty WurliTzer” organs to be installed in a theatre in New South Wales. It was opened on 22nd November 1924 with U.S. organist Eddie Horton at the console. (He remained until October 1925.) The Prince Edward theatre in Castlereagh Street, Sydney, was billed as the Theatre Beautiful and it certainly was a magnificent building.

The organ was designed to have an “echo” chamber in the dome of the theatre containing an “Echo Vox Humana” rank, but this feature never in fact eventuated, the Vox Humana being located in the main chamber. Although the theatre had an orchestral hoist, the organ console was located on a dais to the right of the stage and adjacent to the main chamber. Successive organists were Leslie Harvey (1925-28), Eddie Horton again (1928-9), Julia Dawn (1929-31), Knight Barnett (1931-33), Les Waldron (1933-38), Kurt Herweg (1938-40), and Walter Aliffe (1940-44). The organist who was featured daily at the Prince Edward for more than 20 years until 1965 was the delightful Noreen Hennessy.

During 1964 it became known that theatre must close and be demolished at the end of 1965. In September 1964 an enquiry from the Theatre Organ Society of Australia (NSW Division) indicated that the theatre management would be prepared to sell the organ, and agreement was quickly reached resulting in its purchase intact. The final recital in the theatre, played by Noreen Hennessy, was on 15th August 1965. The organ was thereafter removed to storage where complete reconditioning was undertaken by TOSA members. In the meantime an agreement was finalised with the Council of the
Municipality of Marrickville enabling the organ to be installed in its Town Hall at Marrickville (an inner-western suburb of Sydney.) The opening concert
at Marrickville was held on Wednesday, 27th November 1968 played by TOSA patron and theatre organist Ian Davies.

The chambers are disposed in a high-up position on either side of the Town Hall stage from where they speak directly into the acoustically live auditorium. The console is on a movable dais that enables it to be placed in a central position forward of the stage for performances, or to be tucked away against the wall adjacent to the stage when used for practice or open-console purposes.

The specification has since been increased to 11 ranks by the provision of an English Posthorn. The organ is used extensively for TOSA concerts. In the Prince Edward the 10 ranks were disposed of as follows: Solo chamber (left): Tuba Horn, Tibia Clausa, Orchestral Oboe, Kinura Main chamber (right): Clarinet, Open Diapason, Viole d’Orchestre, Celeste, Flute, Vox Humana. At Marrickville the Posthorn rank is also contained in the main chamber. The Kinura has been exchanged for a Krumet. 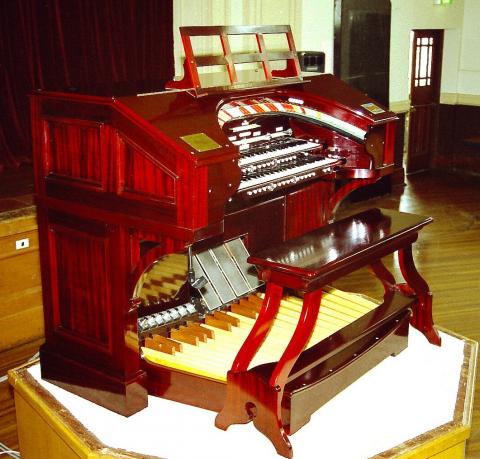