This Wurlitzer organ was installed in the atmospheric-style Capitol Theatre in Sydney’s “Haymarket” (Chinatown) area, opening on 7th April 1928 with US organist Fred Scholl. The theatre had a seating capacity at the time of 3,200. The organ cost $42,000, and incorporated an upright piano contained in a box at floor level adjacent to the console pit which was at the left forefront of the proscenium. Seated in the theatre patrons were surrounded by exteriors of buildings adjoining a “garden” including many reproductions of European statuary. One of the most prominent “buildings” to the right of the stage and at the level of the dress circle contained the solo chamber of the organ, enabling it to speak directly into the auditorium. The main chamber on the left spoke from behind a grille at the rear of a huge
ornamental fountain. The ceiling of the theatre was a huge blue bowl of sky, upon which a special machine played ever-changing effects of sunrise, sunset, night with twinkling stars, drifting clouds and even rainbows. The big 32’ Diaphone pipes rocked the theatre from above the ceiling.

Other organists who played at the Capitol in residence included Knight Barnett, Billy Dick, Renee Lees, Walter Aliffe, Reg Maddams, Dennis Palmistra, Jean Penhall, and Manny Aarons. The organ was recorded on a Spotlight 10” LP by Reubert Hayes in 1950, and by Ian Davies for Concert Recording (12” LP) in late 1960s.

The organ was “closed down” in 1956, Jean Penhall being the last professional organist. In 1963 members of the Theatre Organ Society of Australia (NSW Division) were given permission by the management (Greater Union Theatres) to have access to the organ, mainly on Saturday mornings, and much urgent restoration work was done leading to occasional concerts. In 1972 Greater Union surrendered the lease of the theatre to the owners (Sydney City Council) and offered to sell the organ to TOSA. This offer was quickly accepted and the organ removed to storage. Restoration work by members continued over many years , with the organ eventually being reinstalled in the Orion Centre, Campsie (a mid-western Sydney suburb), a former theatre owned by the Canterbury Council.

Organbuilder John Parker was brought in to complete the work that volunteers had commenced. The chambers for the organ there speak from beneath the stage, with the console being on a hoist in the
centre and immediately in front of the stage. The upright piano is also brought out for concerts and can be quite a feature. The opening concert at the Orion was played by TOSA patron, theatre organist Ian Davies on 1st October 1988. The organ is regularly featured by TOSA in concert, and has been played by many renowned organists both locally and from interstate and overseas. TOSA members also have playing access.

Two additional pipe ranks, English Horn and Solo String Celeste, were added to the installation, bringing it to 17 ranks. Although in the Capitol a stoptab had been labelled Saxophone, this rank had been exchanged for a Krumet from Adelaide Regent early in the organ’s life.

Notes on Organ Use:
Regular member days on 2nd Thursday of the month. 10:30am to 1:30pm. Contact Craig Keller at craigkeller1966@gmail.com to confirm. Players and listeners welcome.
Organ 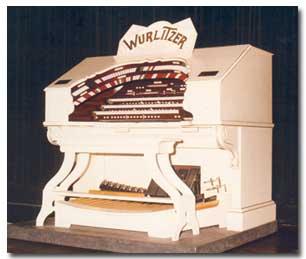