Simon was born in Halifax, UK and showed a keen interest in music from an early age.

He began learning to play the piano accordion at age six and continued with that instrument for eleven years, winning several competitions along the way. When he was ten, his parents purchased a small electronic organ. After initially teaching himself to play it, he commenced formal studies with a local teacher, Michael Woodhead, who gave him extensive tuition in classical organ and piano.

Simon's first experience of the theatre pipe organ was hearing the late Ernest Broadbent play the “Mighty Wurlitzer” at Blackpool's Tower Ballroom. He subsequently discovered that a local, privately-owned instrument could be hired out by the hour, and began making weekly practice visits. In 1982 he entered and won the Northern Young Theatre Organist of the Year competition. Nigel Ogden, presenter of BBC Radio 2's The Organist Entertains, was in the audience, and invited him to make some recordings for the programme on the BBC theatre organ at the Playhouse Studio in Manchester.

The broadcasts resulted in a flurry of concert offers, and Simon has since performed at all the major theatre organ venues in Britain, as well as touring in Germany, Holland, Australia, New Zealand and the USA. There have been numerous appearances at Annual and Regional Conventions of the American Theatre Organ Society, and Simon was honoured to accept the ATOS Organist of the Year award at the Society’s 1997 Annual Convention.

Simon’s music has won high praise from his peers. Lyn Larsen said: ‘He is that rare combination of flawless technique, impeccable phrasing and an unerring sense of musical good taste.’ And Nigel Ogden added: ‘Here is someone who was born to be a theatre organist. His ability has earned him the genuine admiration of both audiences and colleagues alike.’

He combines his concert and recording activities with work for the Cinema Organ Society, the UK’s leading theatre organ preservation group, and a full-time career in corporate banking, based in London. 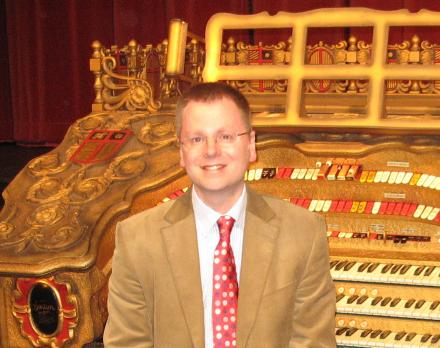