Fast-forward twenty years. While many theatres still housed their pipe organs, most were unplayable or unused and forgotten. New York's Radio City Music Hall was perhaps the only venue where the Mighty Wurlitzer had been featured daily from the day it opened until the 1970s. Millions of visitors who heard the Radio City Music Hall organ would have been amazed to learn that their home town theatre also housed a silenced pipe organ. 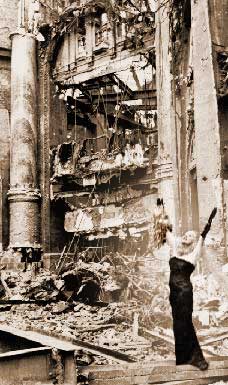 Another technical innovation was about to prove responsible for a rekindling of interest in the theatre pipe organ. In the 1950s, the long-playing, high-fidelity phonograph record was introduced. With its expanded frequency range, the LP was tailor-made for the wide dynamic and frequency ranges of the pipe organ. The theatre organ, with its ability to render popular music effectively, quickly found favor among hi-fi buffs. In short order, there were numerous theatre organ recordings listed in the phonograph record catalogs. 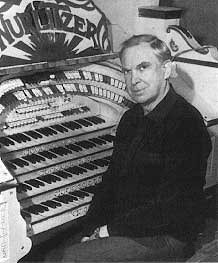 None of these new recordings was more popular than those of George Wright (right). He made a series of LPs on a five-manual Wurlitzer which had been removed from a theatre and installed in a private residence. Wright had been a student of Jesse Crawford, and had been organist at both the New York Paramount and San Francisco Fox theatres before moving on to radio and television. Wright brought a whole new style -- both modern and personal -- to his recordings...and they caught on like wildfire.

Perhaps because of the recordings of George Wright and others...perhaps because people remembered the instrument with nostalgia...perhaps just because the time was right -- people began to go into theatres to see if those organs were still there and if they still worked. Some were, and some did!

Yet another plague was about to descend upon the world of the theatre organ, even as its renaissance was beginning. The problem now was urban decay. Flight from the cities was causing the demise of downtown business areas across the country. In small towns, local businesses went bankrupt as shoppers headed for the new, big discount stores. In the large cities, people began to shop at the new malls in the suburbs. The downtowns were deserted, and unsafe at night. The theatres had little business, and began to close as new multiplex theatres opened in the suburban malls. With inner-city real estate being extremely valuable, those big, empty theatres would not stand very long.

Many majestic downtown theatres were destroyed...along with the pipe organs that remained in the way of the wrecking crews. Some of the organs fared better as collectors removed as much as possible, before...and sometimes as the wrecking ball made its first swing.